Jon Gomm is an English singer-songwriter and performer. Using a single acoustic guitar to create drum sounds, bass lines and melodies simultaneously, his songs draw on a range of influences and styles including blues, soul, rock and even metal. Michael Hedges is an important source of inspiration.[1] To date he has recorded three solo albums and has toured full-time since 2004. 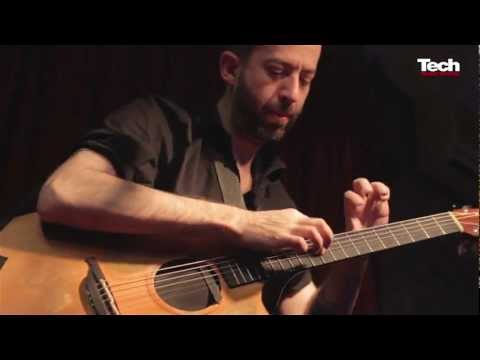 Jon Gomm started playing ukulele at the age of two.[1] Classical guitar lessons began at the age of four, and at twelve he was accompanying his father, a music critic, to blues gigs in his hometown of Blackpool. As a teenager he played electric guitar in the style of the rock greats.

On leaving school, Jon Gomm turned down a place at Oxford University studying English to attend The Guitar Institute (now part of the Institute of Contemporary Music Performance[2]) in London.[citation needed] While there, he paid his way through college playing jazz in café-bars, recording as a session guitarist, and playing Country music in Working men’s clubs for line-dancers. He moved to the Yorkshire city of Leeds, where he is now based,[when?] to study on the Jazz degree course at Leeds College of Music.

His solo performances started in Leeds.[3] He extended the sounds he could make with an acoustic guitar – hitting the surface to make snare drum, bass drum and bongo sounds, re-tuning the strings to get bass sounds, and using high harmonics from the guitar for synthesizer-like effects. He worked these techniques into his own songs, and put his years of singing blues into use.

Musically he is a disciple of Michael Hedges, and as such part of a generation of guitarists using extended techniques which includes Andy McKee and Erik Mongrain. The tattoo on his arm is from the cover of the Michael Hedges album Oracle.[1]

In addition to his own performances, he has also played gigs with Tommy Emmanuel (Australia), Nick Harper and Bob Brozman.

He has performed at festivals including Download, Electric Picnic, The Canadian Guitar Festival, The Italian National Guitar Festival, The Garforth Arts Festival and The London Guitar Show at Wembley Arena. He performs regularly across the UK and the rest of the world with tours in China, Brazil, South Africa, Turkey, Australia and Canada.

In February 2012 a video of him performing his song “Passionflower” was the subject of a tweet from the broadcaster Stephen Fry, leading to articles in the Daily Mail[5] and The Telegraph[6] newspapers. This led to him appearing on several television shows and being booked for gigs and tours around the world during 2012, as well as releasing an instrumental cover of Chaka Khan’s classic “Ain’t Nobody”.

In November 2013, the album “Secrets Nobody Keeps” was released after being 100% crowd funded in the short space of 4 weeks in a whirlwind PledgeMusic campaign that drew on the power of Jon’s fans and viewers worldwide. The album title is a nod to Jon’s gratitude for the power of social networks, and a reference to the Stephen Fry tweet mentioned above. “The success of the PledgeMusic campaign has been so gratifying” enthuses Gomm “People tell me I’m too open on social networks, but I lived through all these overwhelming life-changes online, taking support from my friends and fans.”

Acoustic guitar player and singer-songwriter, Jon Gomm, was catapulted into the spotlight with a single one word tweet: “wow”. The tweet, sent in February 2012 by comedian, director, writer, actor Stephen Fry [7]

“…how on earth can one man play so proficiently a “one man band” style that puts full bands to shame?” Sandman Magazine.[8]

“Leeds should feel very lucky to have such a performer to call its own” Leedsmusicscene.net.[9]

“We have seen the future of acoustic guitar playing, and it is called Jon Gomm” Blues Matters!.[10]