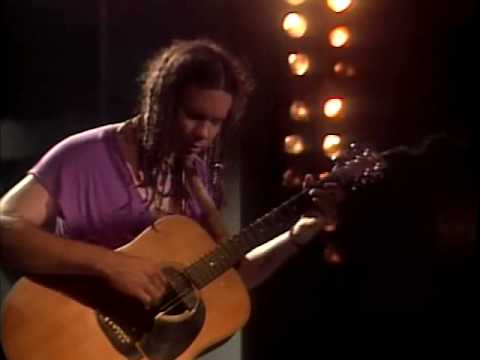 Hedges’ life in music began in his hometown of Enid, Oklahoma, where he flirted with various instruments before focusing on flute and guitar. He eventually enrolled at Phillips University in Enid to study classical guitar, but more importantly, to study under the tutelage of his compositional mentor, E. J. Ulrich. Subsequently Hedges was a composition major at Peabody Conservatory in Baltimore, Maryland who applied his classically trained musical background in combination with various unusual techniques to the steel-string acoustic guitar. He covered a wide range of musical styles and was considered an extremely dynamic performer in concert. Hedges made ends meet playing and singing in pubs and restaurants in the Baltimore Metro area during his tenure at Peabody. In 1976 to 1977 he played electric guitar and flute for a local jazzy folk rock group called Lotus Band, which he left to start performing solo acoustic. In 1980, he made plans to move to California to study music at Stanford University. Hedges was contracted in February 1981 by William Ackerman who heard Hedges performing at The Varsity Theater in Palo Alto and immediately (using a napkin from The New Varsity) signed Hedges to a recording contract on the Windham Hill label.[1] He was married to flautist Mindy Rosenfeld but the couple divorced in the late 1980s.

Hedges’ first two recordings for Windham Hill—Breakfast in the Field and Aerial Boundaries—were milestones for the acoustic guitar.[2] He wrote nearly exclusively in alternate tunings. His early recordings and most of the ‘Breakfast in the Field’ album were recorded on the Ken DuBourg guitar and his Martin D-28 “Barbara”. Some of the techniques he used include slap harmonics (created by slapping the strings over a harmonic node), use of right hand hammer-ons (particularly on bass notes), use of the left hand for melodic or rhythmic hammer-ons and pull offs, percussive slapping on the guitar body, as well as unusual strummings. He also made extensive use of string damping as employed in classical guitar, and was known to insist strongly on the precise duration of sounds and silences in his pieces. He also played guitar-variants like the harp guitar (an instrument with additional bass strings), and the TransTrem Guitar. He was a multi-instrumentalist, playing piano, percussion, tin whistle, harmonica, and flute, among others on his albums. Bassist Michael Manring contributed to nearly all of Hedges’ records.

Frustrated that his published work reflected only the instrumental side of his creative output, Hedges convinced Windham Hill to release Watching My Life Go By, a 1985 studio recording of Hedges’ vocal originals written over a span of 5 years – songs often performed at his concerts leading up to the album’s release.

His fourth album, a live recording called, Live on the Double Planet, was assembled from 40 of his live concerts captured from 1986 to 1987 recordings. Subsequently, Hedges earned the freedom to release his albums with vocal and instrumental songs alike, something his first album would have contained were it not for the direction of record label initiatives.

Hedges had a very broad range of influences and his output spans many genres. His musical education was largely in modern 20th century composition. He listened to Martin Carthy, John Martyn, and the Beatles, but his approach to composition owed much to Igor Stravinsky, Edgard Varèse, Anton Webern, and Steve Reich, in addition to experimental composers such as Morton Feldman. He saw himself as a composer who played guitar, rather than a guitarist who composed music. He was often categorized as a new-age musician because of his association with the Windham Hill record label. Somewhat in reaction to this, he would describe his music as “Heavy Mental”, “New Edge”, ““Acoustic Thrash”, “Deep Tissue Gladiator Guitar” or “Savage Myth Guitar,” amongst other terms.[3]

Hedges toured briefly as a co-bill with Leo Kottke. These shows included solo performances by Kottke and Hedges and, as a finale, a number of duets including performances of Kottke’s “Doodles” with Hedges playing a high-strung parlor guitar.

Hedges was left-handed but played right-handed guitars. Hedges would experiment with different pick-ups, effects and gain structures to achieve a different and unique sound for every song. Making full use of his equipment, Hedges was also able to equalize precisely the live sound from his instruments within the concert hall in which he was performing. He used state-of-the-art equipment such as Sunrise magnetic soundhole pickups, the piezo-crystal F.R.A.P. (Flat Response Audio Pickup) and later, Trance Audio soundboard transducers.

In late 1997, Hedges died at the age of 43 in a car accident along State Route 128 in Mendocino County, near Boonville (about 100 miles (160 km) northwest of San Francisco). According to his manager Hilleary Burgess, he was driving home from San Francisco International Airport after a Thanksgiving visit to a girlfriend in Long Island, New York. His car apparently skidded off a rain-slicked S-curve and down a 120-foot (37 m) cliff. Hedges was thrown from his car and appeared to have died nearly instantly. His body was found a few days afterward.[5][6] After his death, his record Oracle won the 1998 Grammy Award for Best New Age Album.

Hedges’ unfinished last recordings were brought to completion in the album Torched, with the help of his former manager Hilleary Burgess and friends David Crosby and Graham Nash.[7]

“I feel I can always hear his heart when he plays. He respected my playing too, and that simply thrills me.” – Pete Townshend[8]
“Michael was unique. His music transcends genre and trend. It’s truly musical, fun and enlightening.” – Steve Vai[8]
“His playing has a feel and timbre all its own – technically brilliant, but always organic and true.” – Joe Satriani[8]
“One of the most brilliant musicians in America.” – David Crosby[8]
“I considered him to be a genius and when he died I lost a great friend.” – Graham Nash[8]
“There was simply no one like him.” – Bonnie Raitt[8]
“He was a real musician who remained humble even through stardom. A rare breed indeed.” – Alvin Lee[8]